No More War!
Artists During the First World War

The “long” 19th century ended with a total breakdown of civilization in the attrition warfare and mass killing in the trenches on the western and eastern fronts. The main focus of the exhibition at the Kunst Archiv Darmstadt e.V., alongside the works by Karl Deppert (1897-1988), Karl Thylmann (1888-1916), Josef Eberz (1880-1942), Karl Scheld (1895-1936) and others, was the work of Ludwig Meidner. He anticipated war, violence and catastrophes in his drawings and paintings with seismographic foresight and shaped them into artistic expressions as apocalyptic landscapes and battlefields. At the same time, other artists painted history paintings, only becoming Expressionists through confrontation with the reality of World War I.

Meidner was the hottest crater on the art landscape of the time, the first true Expressionist, who made accusations and claims for humanism and humanity: an eavesdropper on his time. Karl Deppert returned to Darmstadt traumatized from the war, Josef Eberz produced a large folio on the war, and Karl Thylmann, a great hope in art at the time, was hit very early on by a bullet at the age of only 28. He died, like Franz Marc, August Macke and the poets Georg Trakl and Ernst Stadler. Compelling works by these artists, some of them never shown before, highlighted the brutal reality of the warring events between 1914 and 1918. 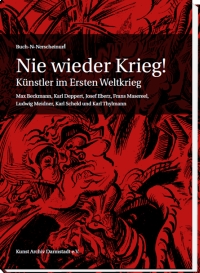